April Showers Bring a May Trip to Flour House

If you walk down the coastline at Avila Beach, the salty ocean air will linger inside your nose in a way that will never leave you but rather open your mind like a scrapbook at any point later in life when this same scent invades your nostrils.

The same is true for the savory mix of dough and salty cheese that causes the senses to erupt upon passing Flour House in Downtown San Luis Obispo.

The door and large windows of this small facade are almost certainly left open in order to entice passersby employing the same kind of strategy used to lead a flamboyant Collie around the ring of a dog show; one whiff and you will heel on in through the front entrance as though a leash is pulled taught around your neck. 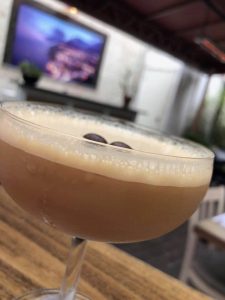 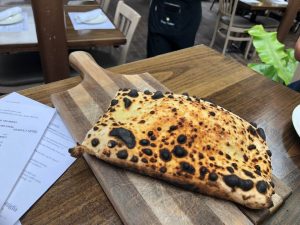 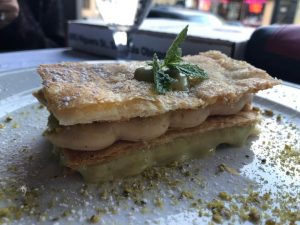 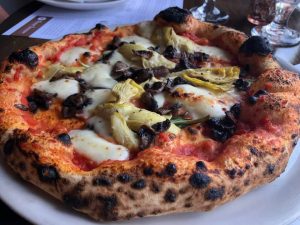 The scent that emanates from Flour’s wood fired oven truly delivers on authentic traditional Italian pizzas, which are framed in the most plush dough and topped in rich sauces and fresh cut produce and meats. A marvelous marriage of marinara and mozzarella, a perfect pairing of pancetta and pesto, or a delicious dance between dollops of potato and fior di latte. The crusts of any one of your selections arrives at the table with the kind of toasting one can only hope to receive on a trip to South America wearing just the right measure of sunscreen.

The menu is heavy on pizzas, which you will only truly understand after your teeth sink into the pillowy crusts, but pastas and fish specials can be a pleasing alternative.

A voracious guest would be delighted by a round of fresh baked bread and one of the many specialty cocktails, like the espresso martini, which is $2 off during happy hour 4 p.m. to 6 p.m. Monday through Friday.

If somehow space remains within your stomach, which should be at near full capacity if you’ve done this pizza thing right, the dessert menu will wow you with the kind of attention to detail and craftsmanship that only a true Italian restauranteur could create. The names of the desserts, while romantic, do not produce the kind of visions that words in their descriptions – like “caramelized puff pastry,” “soaked in limoncello,” and “borghetti foam” – can induce. The millefoglie would make a fair penpal to baklava because, despite the 1,300 miles that separate them from Italy to Greece, respectively, they share many commonalities. The Flour House production includes layers of puff pastry, pistachio and hazelnut cream. The flaky pastry crust bows in a satisfying crunch as the fork is pressed into its many layers, forcing the cream to spread out. The fresh pistachios on top add a satisfying saltiness to what is an otherwise rich but savory dessert. It won’t take but mere seconds to devour this petite post-pizza pastry.

Whether dinner is served in the courtyard alongside the creek or in the modern stylish dining room, the menu is sure to steal the spotlight with its wide variety of flavors and styles to soothe even the most demanding stomach grumbles.

Credit for writing and photographs to Taste of SLO blogger Brianne.