Roll Out the Barrels

Barrels in the Plaza, food in the belly.

People in small towns across America often joke that there are five seasons: spring, summer, fall, winter, and construction season.

While there is a fair amount of road work being done at any given time in San Luis Obispo County, the extra season here is actually festival season.

If you think you’re just not the festival type, scroll down the community calendar a bit further and you are sure to find a theme that magically opens your wallet up to deliver payment for the price of entry.

The annual Roll Out the Barrels, which is also referred to as Barrels in the Plaza, brings together a hearty mix of just about any style of food or drink a person could dream up from paella to mac and cheese to shortcake. And don’t forget the wine, the very lifeblood that keeps the heart of tourism pounding on the Central Coast.
The assortment of tables offering Costco-style samples of each restaurant and winery’s prized selection is almost too much to process. The goal is to load up the wooden disk you’re given full of bites from every booth, but like a gangly teen shooting hoops in a game of Around the World, it’s easy to get stuck on a single spot for the majority of the night.

Taste offered a spread of its beloved mac and cheese, one with gouda and cartelized onions, the other with bacon. The miniature versions of their palate-pleasing noodle nests were scooped off the serving dish almost as quickly as the staff set them down. That’s because the tender macaroni noodles bathed in a generous coating of creamy cheese, caramelized onion swirl, and sprinkle of toasted bread crumbs were enough to send any dieter flying off their meal plans and rushing back in for second helpings. 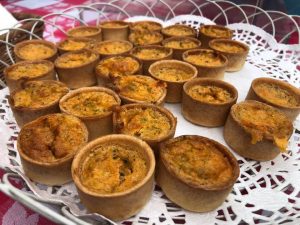 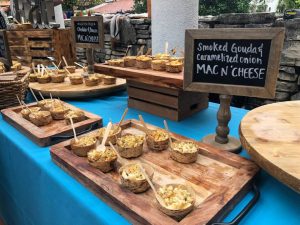 Mint + Craft provided an earthy take on the coveted avocado toast that so many of us are willing to shell out exorbitant amounts of money on (it’s really just bread and avocado, but unexplainably tasty). This version paired a pea spread with wasabi and fresh shoestring carrots and onions atop a crostini. Though wasabi typically brings to mind memories of runny nose over a sushi dinner, this was a much more polite form of wasabi that blended well with it’s calm counterpart.
From SLO Provisions, guests nibbled on brunch fare, choosing from two quiches and a rich dense brownie. The quarter dollar sized quiches came in broccoli and cheese or cheese with bacon, both surrounded in a fortress of buttery flaky pastry crust. For being so small, the brownie packed a punch that knocked you back into the years of childhood, where it almost seemed appropriate to reach in and grab five or six of these chocolate chosen-ones and gobble them up in one gulp.
Diners could also sip a chilled fruity gazpacho, enjoy a chicken and chorizo paella, fork through a zesty summer salad and load up on house made hummus and pita.
To wash down the delectable dishes, guests had the opportunity to tour San Luis Obispo County’s wine country from the comfort of the Mission Plaza courtyard. Chamisal Vineyards, Clairborne and Churchill Winery, Edna Valley Vineyards and Tolosa Winery are just a few of the 30 total vineyards represented at the event, pouring out vino in bountiful proportions. Wines were carefully selected by each vineyard to match the food offered by its restaurant counterpart, creating a dynamic pairing opportunity that the average diner rarely gets to partake in on such a broad level.

Live music from the Bee and the Hive brought the whole event together, pumping lively tunes into the air, where the aromas of delicious food and wine were in mid-tango. 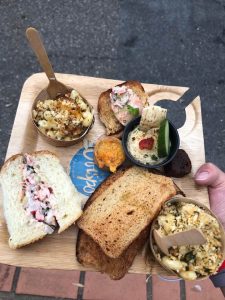 Credit for writing and photographs to Taste of SLO blogger Brianne