While it’s no longer an unfamiliar word that leaves your dinner guests with a puzzled look on their faces, the word “vegan” is still often associated with plates of shredded iceberg lettuce or raw carrot sticks. The truth is that vegans have not-so-secretly been enjoying the same satisfyingly greasy fast-food style burgers, fries, and tacos that their carnivorous friends find so tasty. If a meat-eaters unknowingly bit into a burger from Ziggy’s in San Luis Obispo, well, the meat eater probably would have no idea they were indulging in a plant-based meal. 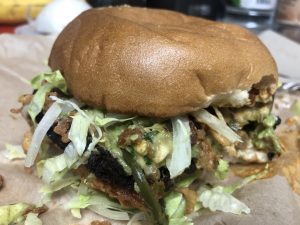 Located on the corner of California Boulevard and Taft Street near Cal Poly campus, Ziggy’s is a tiny hole in the wall that offers up a maximum capacity of flavor. The menu features designer burgers with accoutrements like fried onion straws and roasted garlic aioli. Your choice of cauliflower or avocado tacos, and something called ratchet fries, which are best described as a heap of gooey sauces and salty veggie meat over top a pile of fries.
Ziggy’s very much has a vibe, a west coast swagger punctuated by the old school rap music played in the restaurant and the don’t-call-us-health-food approach the menu takes. Descriptors like “gluten-free” do appear on the menu after an abbreviated offering of salads, but don’t mistake these options for diet food. The gluten-free applies to the dark chocolate chunk cookie produced by Leigh’s Bake Shop, a SLO County vegan baker. The salads include fried cauliflower bites and loads of vegan ranch. You will always feel satisfied but never get the sense that your doctor would applaud your lunch time decision and that devil may care feeling is kind of liberating. 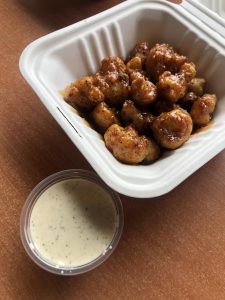 From time to time, Ziggy’s leaves free taco vouchers hidden around time for a bit of excitement. Find one of these cards tucked under a stack of newspapers in SLO or under a park swing in Atascadero and you’ll be treated to a free taco treat from the restaurant known for its flying pig logo. Pair the cauliflower taco with the avocado egg rolls, which come with a tamarind cashew dipping sauce, and you’ve got yourself a great afternoon combo.
Whether you eat a plant based diet or you’re sure to include a slab of meat in each meal of the day, Ziggy’s has the power to delight taste buds of any persuasion. The chill factor of this place makes it welcoming for all diners and the affordability is sure to keep you coming back for more.